In my researches on comparative mythologies, I have come across many similarities between Vedic India, Mesopotamia and Egypt. In all these cultures, the double liberation of the Sun and Waters occupy a prominent place and appear to be, as in the Vedas, the two pillars of their mythological architecture. But the most striking similarity was found between the Vedic god of the Fire Agni and the Mesopotamian Enki (Sumerian) or Ea (Akkadian). We will first present the iconographic representations of Enki/Ea in the cylinder-seals of Mesopotamia (Sumer, Akkad and Assyria) and then turn to the images used to describe Agni in the Veda.

In Mesopotamian literature, from Sumer to Akkad and Assyria, Enki/Ea is the god of the underground Waters. He created the human race to help the gods digging the channels for the release of the rivers. He is the intermediary between the gods and the human beings and generally favors the latter. As the god of sweet waters, he is connected to the rivers, which carry in themselves discernment and judgment. He is at the origin of the flowing of the Tigris and Euphrates, created by his fertilizing power. His abode is the Abzu or Apsû, the underground water. As the god of knowledge, he is the most intelligent and the most expert. 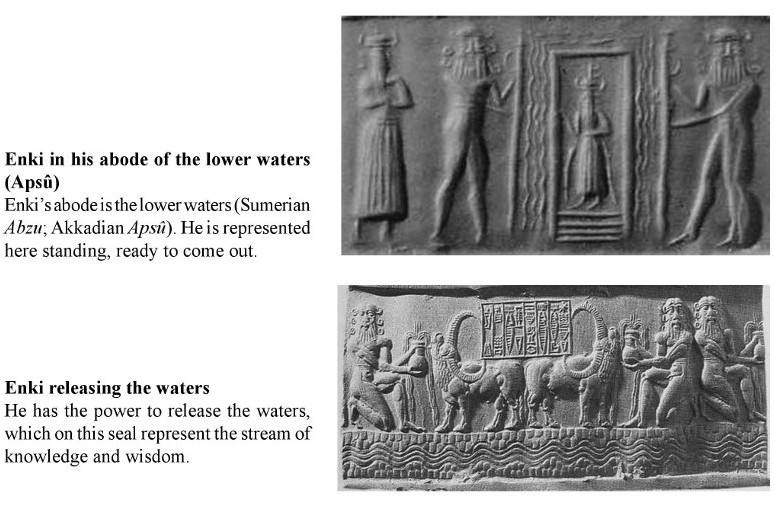 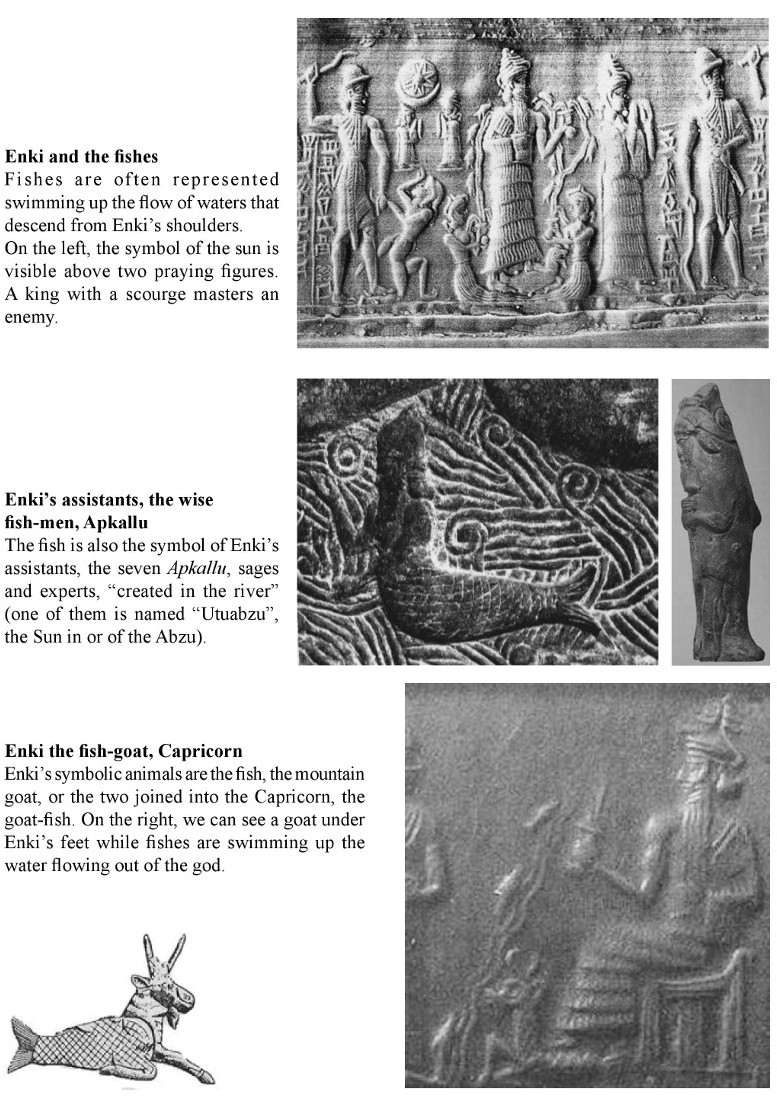 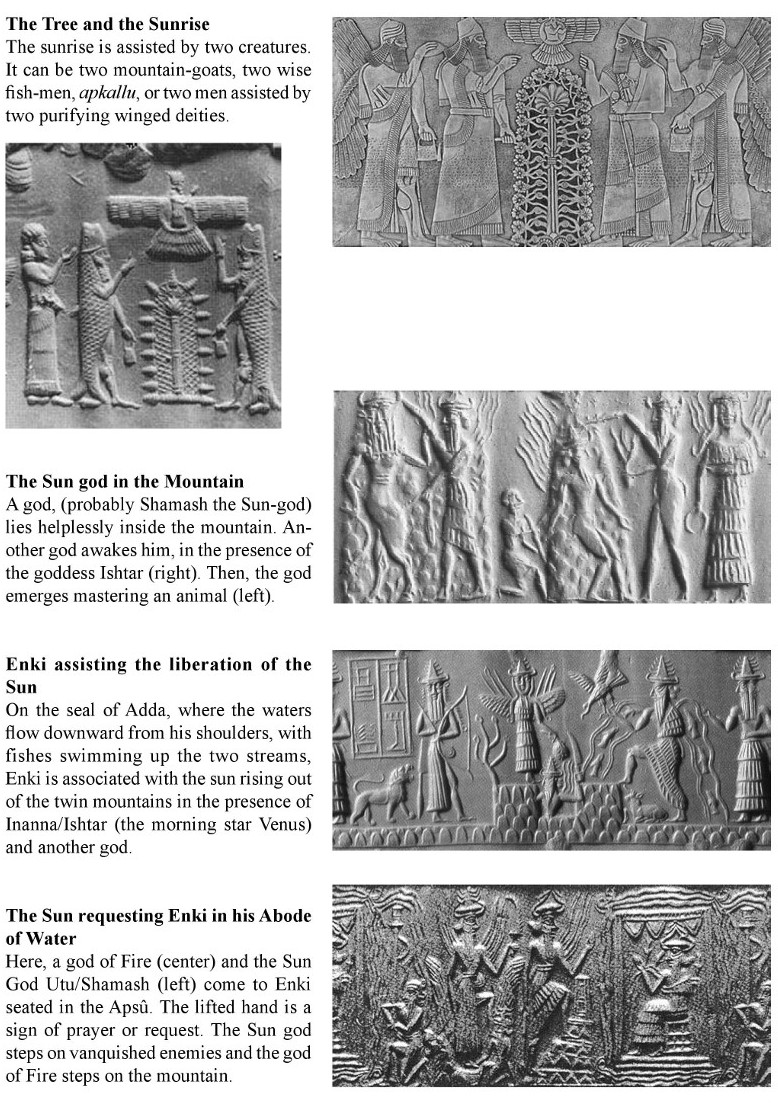 The cylinder seals above convey a general meaning: We see the liberation of the waters and of the sun celebrated and interconnected, with the goddess Ishtar as an active element making them possible; we see the victory over the mountain associated with them, with the sun god imprisoned in it and coming out or stepping on it when it rises or fighting the demon who leans on the mountain; we see Enki/Ea stepping on the mountain to assist the rising of the sun and we see Enki symbolized by a pillar or a tree rooted on the mountain and ascending towards the rising sun or supporting its rising; we see Enki as the mountain goat stepping on the mountain and climbing what is commonly called “the Tree of Life”. If these images do not evoke any coherent meaning for the Assyriologists, they are immediately reminiscent of Vedic mythology to whomever is familiar with it: the ascent of man through the double liberation of the sun and the waters with Agni/Enki playing a key role.

From the pictures above, we can draw some conclusions about Enki’s role as a god: residing first in the lower waters, he enters the movement of a fish swimming up the stream towards the original source; as a mountain goat, he is the same ascending force climbing the mountain and the tree reaching out for its flowers; as a winged mountain-goat he has access to the sky itself, where the sun rises. He seems therefore to symbolise the hidden deity successively awakening in the waters, then earth and sky, in an ascending movement. In his full awakening (which seems connected to the liberation of the sun at dawn), he pours the waters from above, whose streams join with the waters from below. It is significant that in Mesopotamian mythology, Enki/Ea is the god of wisdom, knowledge and the god of all skills.

All this is very reminiscent of the Vedic deity Agni, who is also connected with the waters and with knowledge, and is the link between men and gods. He breathes in the Waters (apsû), then becomes a galloping horse and then a swan in his ascending awakening towards the solar world. He is also the son of the waters and of the trees, sometimes is himself called a tree (vanaspati):

Its flames are compared to branches to be climbed:

The man who knows the law of his workings that are steadfast for ever, climbs them one by one like branches (II, 5, 4).
The seven far-flowing rivers climbed from him like branches (VI, 7, 6).

He is associated with the rising of the sun, and compared to a pillar holding the sky or heaven:

He is nurtured by the seven rivers, born from them and setting them in movement, uniting the solar waters from above with the waters from below:

Agni is always presented as having an inner discernment or understanding, dakshâ; he is called a thinker and a sage (pracetas, vicetas) and a knower (vidvân); sometimes, he is himself the guiding Thought, pramatih. Like Enki, he is the intermediary and link between men and the gods and disposes rightly the sacrifice, giving to each god its share. There are other similarities: like Enki, he is the craftsman, the doer and accomplisher of all works. Like Enki, he knows the secret names of things.

Agni and the Goat

There is also a semantic connection of Agni with the goat and with an ascending curving movement: see the Sanskrit roots ank, to move in a curve; anj, to bend, go towards, request, worship; see the nouns ankurah, a germinating form, an offspring, angârah, charcoal, and ajah the goat, but also “the unborn”. We find the word associated with the image of Agni as a pillar in RV I.67.3: As the unborn (ajar na) he has held the wide earth, he has up-pillared heaven with his mantra of truth.

The two key-words, Enki and Abzu, are said by Jean Bottéro, the French Assyriologist, to be of unknown etymology. It is striking that they are very close to the Vedic Agni and apsu (in the waters, locative plural of apah, the waters) and that the structural relation between Agni and apsu is the same as between Enki and Abzu: two hidden ascending gods with similar names sit in the watery abode designated with a similar word; both are associated to the sunrise and stand as a tree or a pillar. Considering that some mythological and psychological functions are also similar (particularly the link with knowledge and skill), it is very difficult to escape the hypothesis of a Vedic or maybe pre-Vedic input into the Sumerian civilisation.

This is reinforced by the fact that the Sumerians themselves considered that civilisation was brought to them from the East, maybe from the land of Dilmun (Bahrain), by seven wise fish-men swimming up the rivers from the sea, presented as Enki’s assistants or creatures[1].

Agni being a god of Fire and Enki of Water, one could object to their brotherhood. But we find in Mesopotamian mythology two gods of Fire: Girra (Fire) and Nusku (the lamp), both born in the Apsû and holding some of Agni’s specific characteristics: fire and light of the house, lit in darkness, presenting offerings to the gods, assisting the Sun god, purifying, gods of light and warriors, always renewing themselves, and both sages and experts, as Enki their father. Morever, Agni is closely related to the waters: first, he is râjâ apsu, the king in the waters, (RV, X, 45, 5), like Enki. He himself is like a river running in its channel and sends in his front the descending waters (RV, I.66.5) and connects the waters from above with those from below: Thou goest towards the ocean of the sky… towards the waters that abide above in the luminous world of the sun and the waters that are below. Let thy fire that dwells in the waters joining with those that descend accept the sacrifice. (RV, III.22.3&4). And also Thou art like a fountain in the desert to the longing man (RV, X.4.1).

To take Agni as the name of the ritual fire only is to mistake the signifier for the signified. He is many things: a flame, a stream, a bird, a tree, a boat, a lion, a horse, a chariot, a craftsman, a thinker, a warrior, a sage and a knower, a seer and a will, often the seer-will (kavikratu), and he fulfills many functions: messenger, guest, priest of the call, bringer of the oblation, knower of all things born, friend and leader of the human people, fosterer, purifier, and none of these exhaust his reality, for he is said to have many names and to be manifold in his forms. But he is always connected with the truth, satyam, ritam, possessing the truth, ritavân, a feature that his simili Enki seems to have lost in Mesopotamian written literature (the only one that survived in some forms), where he appears more clever than truthful.

What is common to both Agni and Enki is their representation of a hidden god awakening progressively to different planes of being (as fish, mountain-goat then winged goat for Enki, as fire, horse then swan for Agni) and represented as an ascending force. The outer symbols of water and fire are only images used to convey this underlying meaning. The common pattern is the outflowing or upflaming of the hidden deity, which is why both can be represented by a tree: the tree is a symbol of an ascending and unfolding movement linking the underground waters to the sun.

We find in the Vedic and Mesopotamian system of images a similar underlying structure: the liberation of the sun and waters is the main architecture. The fact that the symbolic vocabulary (the signifiers) is proper to each culture implies that the initial input (the signified) has been reinterpreted in the terms of the Mesopotamian physical milieu, or that both cultures had a common origin, maybe referring to what the Vedas call the forefathers (see the similarities between the seven Angirases and the seven Apkallu, servants of Agni and Enki, respectively). This, of course, supposes that a Vedic or pre-Vedic culture was not brought to North India around 1500 BC by invading Aryans but was already in the area in the fifth millennium, when the Sumerian culture constituted itself.

It is very striking that the Mesopotamian cylinder-seals display the closest and oldest iconographic representation available of some of the main Vedic images. This generally escapes the attention of the Assyriologists who have no knowledge of the Vedic material, still less of Sri Aurobindo's psychological interpretation of the Vedic corpus. Going further in this study would require a pluridisciplinary approach, which is not favoured by the present overspecialisation of scholarship in this field.