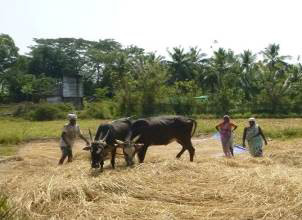 A sense of amazing peace and unexpected joy seizes me as I walk towards the golden field in front of me, surrounded by forest, a small ariva (sickle) in hand. After the briefest of explanations how to cut and heap the mature rice stalks, I join the other harvesters in the field to do the most natural thing in the world as if I had always done it. The deep silence of this place is the backdrop to voices of birds and the hum of insects, and the distant, harmonious murmur of conversations by others who have come for the day to help with the harvest. “We will have an easy start, not before 9am, as the sun has to dry the rice plants before we cut them”, we had been told by the stewards of Nine Palms, one of Auroville’s oldest farm and forest places tucked away in the Northern greenbelt.

As my hands do the cutting and my eyes encounter ladybirds, butterflies and a multitude of critters, Ingrid who with her grown-up children looks after the farm, shares with me from her rich experience of decades of farming on this land, from the unimaginably simple conditions and the challenges of the first years. She explains the special nutritional qualities of this traditional type of red rice, which is entirely monsoon-fed and takes five months to ripen (compared to three as with most modern varieties). “Thanks to the abundant monsoon we are a bit late in the season, but look how full the panicles are; this is an excellent harvest! We have had meagre years where we barely got back what we had sown… Regardless, harvesting time is always a joy and a celebration, and more so this year. Klaus would have loved it and it feels like he is here with us!”

The bundles lying in rows across the fields are gathered and carried to the nearby thrashing floor, where a small strong-armed team and two bullocks are engaged in separating the paddy from the straw. A timeless method, as close to zero-footprint as it gets, carbon-neutral and perfectly beneficial to the whole circle of Nature, from the soil to humans and everything in between. Harvest done for the day, it takes me less than 10 minutes to cycle back to Matrimandir, yet I am lingering in this world I’ve been allowed to enter, so amazing and precious, as if a well-kept secret, and part of this incredible diversity that is Auroville!

Meanwhile, most of the Auroville-grown rice we find in our food outlets and community kitchens comes from Annapurna. Auroville’s largest farm, with a total of 135 acres, grows traditional varieties of brown rice, red rice and a few white table rice types, as well as a few varieties for the sake of preservation. Here, the larger scope of production requires a very different style of farming. As steward Tomas shares: “Small scale is wonderful; one can be more intensely involved in the cultivation with community members. Once the scale goes up, labour becomes the first bottleneck, and some mechanisation is inevitable. One has to do careful planning. We sow seedbed every 10 days, which covers 2 acres of land. So when we do 14 acres, we are busy for more than two months with field preparing and planting. If we go slower, we end up too late in the season and will have water problems later. Also our traditional rice varieties are season-bound and need to be sown at the right moment.”

All of Annapurna’s rices are irrigated – the farm has a large rainwater catchment pond – and transplanted. “We have stopped dryland rice due to high labour costs and relatively low yields. Erratic rains are also difficult. We don’t grow a second paddy crop; most land gets sown under green manure which is grazed on a rotational base during the summer; we try to integrate the dairy into the field crops. We do grow small amounts of pulses, sesame and ragi after the rice.”

Asked about the effect of the recent monsoon, Tomas say that some millets (dryland crops) have suffered, such as varagu and kudravalli, as well as the early-maturing rice. “Also the cattle had a tough time in the mud for so long!”

Annapurna’s total rice yield is presently around 10-12 tons, with variations from year to year. Efforts are being made to increase the yield and make it more viable, but so far this has not been easy.

The good news is that – after a few years of misconceptions which had led to an astonishing surplus in Auroville’s rice store – since last year, our own, locally grown and organic boiled rice is again used at Solar Kitchen. As Tomas explains, “right now the flow of rice which goes there is good, because on our side we also have to keep up with the processing. If the demand continues to increase, we will at some point run out of rice because right now consumption exceeds production!”

Fortunately, Annapurna with its black cotton soil, where the majority of Auroville’s rice is grown and practically all our grains are processed and stored, is not the only rice-producing farm in Auroville. Several farms within the greenbelt grow smaller rice crops, such as Solitude, Ayarpadi and Siddhartha Farm. Of particular significance is Siddhartha Farm, due to its location in direct vicinity of Irumbai Lake, Auroville’s only major Eri, or traditional rainwater catchment tank. Known for its rice, sugarcane jaggery and peanut butter, this farm has naturally rich soil, and after a good monsoon the lake yields irrigation water until May, allowing for a second rice crop after Pongal. Steward Herbert explains how the present production of 4 tons can be expanded to 8 per year, and a second crop could again double that amount. And there is more to this area: If Auroville is to move towards self-sufficiency in basic food supplies, these fertile, traditional paddy fields are a vital key. Important plots neighbouring Siddhartha Farm are presently available, and are part of the efforts of the GreenAcres campaign. The video ‘Irumbai – A Bridge between the Past & the Future’ – at [broken link] – beautifully illustrates their potential.