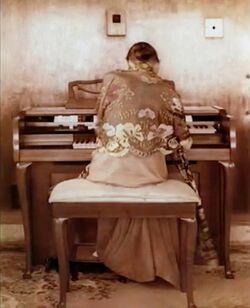 (Mother used to improvise on the reed organ and later switched to an electric organ. She played on New Year's Day and on some other occasions. These were recorded from the 1950s.)

(Satprem:) “But do you hear something when you play, or what?

(Mother:) When I play I generally hear what I am playing. It's hard to say.... It's not just an ordinary sound, it's a combination of sounds, and it's not ... no, it's true, it's not the same sound but something like the essence of that sound. But for instance, I have a sort of feeling that what I am hearing should be expressed by a large orchestra.... I SEE it, you know, I see something like large orchestras around me, on my right, on my left – and I am supposed to transcribe it on a harmonium!”[1]

“Mother, every Sunday you play the organ and you always play well. But sometimes we feel that you play better!

Every time you play well, no doubt, but sometimes we feel that you play better.

“What is the significance of the tune that goes on repeating itself in your music so often?

(Mother:) You must have noticed that this tune generally comes after some trouble or chaos has been expressed. It comes as a solution to a problem. It means an advancement, a progress, a step forward in consciousness. It comes as an enlightenment. My music resembles the inner movements of the Sadhana. Sometimes a trouble, a chaos, a problem, a wrong movement which seemed conquered returns with a greater force. But then, as an answer or as an aid, the growth, the unveiling of the consciousness — and then the final enlightenment.
This music is very difficult to understand — especially for the Western mind. To people from the West it often means nothing; nor do they easily feel in them the corresponding movements. Mostly those who can appreciate the Indian Ragas can like that music; for there is some resemblance with the Ragas. But here too from the point of view of form, all conventions of musical laws and notations are broken.”[3]

“From where does it come?

(Mother:) Before sitting down I don’t even know what notes I am going to play. The region? It is always the same region. This is why I can speak with some experience about the origin of Berlioz’s music, because it is a region very well known to me, one I frequent assiduously. But I do not at all know what will come. Nothing at all, nothing. I don’t even decide what feeling or idea or state of consciousness is going to be expressed, nothing. I am like a blank page. I come and sit down, concentrate for a minute and let it come. Afterwards, sometimes I know, not always. But when I hear it a second time here, in the afternoon or evening, then I know; because it is no longer I, it is something that comes from outside. So then I know quite well what it is like.”[4]

(Mother to Mona Sarkar:) “It is true that my music calms the body. From it emerges a sort of compassion which envelops the one who is listening. It is like a harmony that neutralises the disharmony in the chaos and pacifies the resistances, a melody that purifies the aspiration...
My music brings down the original vibration from the Source; it engulfs you, and lifts you up to the unknown regions. So with this music everything would calm down.”[5]