(Shyam Sunder:) “Pournaprema came to see me one evening, early February 1971, with a message from Mother to see her next morning. It was something very important and in connection with Auroville. She knew what I will be told, but thought it would be better if I heard it first from Mother herself.
Mother had stopped seeing people from early December, and in the latter part of January, Nolini had resumed going to her and then Madhav also. But it was just coming and going, work was not yet resumed yet.
There was some natural suspense in my heart. Never before Mother had sent for me and on the way I felt its importance.
I did my pranam to her as usual and when I lifted my head, she smiled and asked, “Will you do what I say?” It was an unexpected start, but I immediately answered, spontaneously, “Yes, Mother.”
She was still very weak and her voice feeble, but clear. She first spoke of the sad state of Auroville and of the way things were being done there. She specifically mentioned the name of Nava and wanted a change.
“I have none else in view,” Mother said. “You are my last chance for Auroville.”
Then she spoke of the hard and difficult work that was being assigned to me, in spite of my weak health of which she would take care.
She also said, “Don't think I am giving you a big and comfortable chair to sit on. You will have lots of difficulties, but I will be with you. You will not give up saying that you are incapable.”
She added, “And I will hold you morally responsible for all that happens in Auroville.”
In the end she said that if I agree to do the work, she would see me daily with my report and problems, and with her divine solicitude and humility, she added, “I will try to help you.”
I repeated, “Yes, Mother.”
The very next morning she asked with expectant smile, “So, what did you do yesterday?” I reported to her, and for further steps suggested to wait for Navajata's return. Mother did not like to wait, and we started in full gear.”[1]

(Roy:) “The thing I am sure everyone who came early will tell you, is that the vibration of the Mother here was so strong and physical that you could not think of leaving. Now everyone goes out for summer because it is hot. In those days we would not leave for a second because it was totally happening and you would not like to miss one moment. You had these experiences, and after a few days Mother would say, “Oh, yes, something came down and did this...” You felt it. Her Being was so big and powerful and present that you would not even dream of... Why leave?”[2]

(Roy:) “I was very young when I came. In fact, the oldest persons in Auroville were Frederick and Shyama and Francis. They were the adults. The rest of the people were my age, like twenty. The whole place was run by kids basically. Besides the other aspects, it was really fun. It was an amazing place where you would feel totally comfortable as a young person. There was no one to tell you what to do. So we did every stupid thing you can imagine. It did not matter. It felt very experimental: we try this, it does not work, so what?
We were living in the middle of the fields, sleeping in the fields, there were no trees. The water used to come by kattavandi. We would wait and see in the distance the kattavandi coming with the water. It was timeless. There was no electricity, no village music. It was still the ragi culture here; there was this amazing cycle of timelessness. I don't know if you have ever ploughed a field with bullocks, it is an amazing feeling. Watching them is different, but if you do it yourself, you feel an amazing security. This is a wonderful thing, ploughing the field.”[3]

(Ruud Lohman, 16 October 1971:) “This afternoon we had a meeting at Matrimandir to which all Aurovilians were invited. About sixty of them came to the dining-room of the Matrimandir Workers' Camp. Matrimandir had reached a very critical phase and we wanted to pull through it as best we could. This week it was rumoured that the work will be given to a contractor. This news got people moving and maybe that was the only meaning in it. It was generally felt that if Matrimandir went to a contractor it would become a monument and nothing more, and one could just as well put a Gandhi statue there or something like that. It wouldn't be our building, we wouldn't grow into it and it wouldn't be the centre of Auroville. It was said that Mother wants the excavation and also the four great pillars sustaining the sphere to be ready by August 15, 1972. Even to reach that target we have to work full speed. But could we do it with the manpower and knowledge available now? ... Everyone suddenly is of great good will. A letter will be given to all Aurovilians to ask how much time they are able or willing to give to Matrimandir. Next we'll have a bulldozer, even if it cannot do the whole job since the soil is too hard. In the meantime investigations will be made about other types of digging equipment.”[4]

(Savitra:) “It was October of 1971, the winter monsoon was in the wings; and while Aurovilians were still preoccupied, involved in the mechanics of their groping survival, Roger's first creation, a building which the Mother called ‘Last School’, materialized. Despite its abstract beauty, a sculpture sharing something of the austere elegance of the canyon-carved terrain, it would remain an enigma in concrete for those who tried to work within it functionally. It stood somehow through the years to come as a symbol of man's insistence on imposing his fragmentary vision. An eloquent expression of a single dimension, a beauty of form divorced from the context of life.”[5]

(Ruud Lohman, 7 November 1971:) “Yesterday morning we had another meeting at the Centre. We didn't understand anything anymore. Letters went back and forth between Mother and the offices and now all of a sudden things take a new turn: the digging will be done by Tamil workers, to be finished by February 1972 and then a contractor will take over to complete the pillars by August 1972. It seems a serious thing: the Aurovilians who are here now can't get it done and even here we have to employ paid labour. The Tamilians come with their own teams and have their own rhythms, and we would only be in the way.”[6]

(Ruud Lohman, 7 December 1971:) “It seems to go very well at Matrimandir. I have not been there for a week, but there was not much to do anyhow. This week there was a fight between two villages, in the middle of the excavation. After an hour it was over, but so was the work for the day. The excavation looks as if it will be ready before February 1972.
We wanted to hold the meeting of the Study Circle inside the excavation this time. It is a beautiful place as it is now, a huge circle of red earth with many different levels inside. Looking at it we thought it would be a fantastic open air theatre. For Dec. 5, we planned a programme with recitations from Savitri, “The Book of Eternal Night”. We even rehearsed inside and it was beautiful. In the meantime we suggested time and place to Mother, for it is Her excavation. Mother's answer: “...What a strange place...” ”[7]

(Shyam Sunder on a meeting with Mother, 23 December 1971:) “An letter from an unknown person at Delhi says,
“The Saint of Puttaparthi has informed me telepathically that you are keeping very indifferent health. May God bless you with good health to inspire us, your devotees, in the pious ways of life!
I shall be eagerly awaiting for a reply from you to relieve me from anxiety.
With homage.”
Mother's answer: “I am alright.
Blessings.”[8] 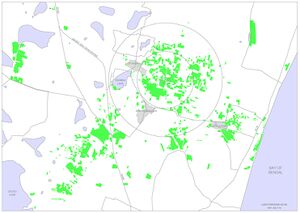 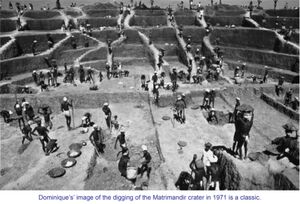 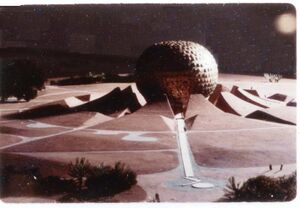