(Jocelyn:) “The whole place [the Ashram] was... like nothing I had ever seen. I had been travelling at that point off and on for years. I travelled extensively, to Middle East and Mexico and Europe, Nepal, Morocco. I had never come across anything like that, that had the kind of light that that Sri Aurobindo Ashram had in 1969. The place was luminous. There were all these old sadhaks there sitting on chairs, offering you chairs, flowers everywhere. The ashrams I had visited were not at all like that. Then they put me in Castelini Guest-House, which is where John Kelly was staying. And John Kelly told me all his miraculous experiences with the Mother and Sri Aurobindo. Which I thought were fun stories. I didn't believe a word of it, but they were great stories. And then Ananta came in, he had just escaped from Jipmer madhouse, he was so far out, so crazy. … (He is Bjorn in Satprem's book, The Sannyasi.) He took me to his island, which was so beautiful you can't imagine. Then John took me to meet Maggi Lidchi, who is an impressive person...
All the time I am stuck there in Pondy because I am waiting for money.
Then August 15, Darshan Day. I go to the Ashram by 10 o'clock in the morning, with my daughter on my arm, to sit in the meditation, and they stopped me at the gate: “No, no, no children.” What! I go back to the guest-house, sit down in front of a photo of Sri Aurobindo, and – you are not going to believe this – he smiled at me. I was...
The next day or two I got a message: “Time for you to leave the guest-house, you had permission to stay until Darshan, Darshan is over, go.” So I decided to go to Ceylon and back to America. I was still waiting for a cheque. I moved into the Quality Hotel by the park. Now I didn't tell anybody where I was, I had never written to Mother, I had made no approach to her. I left the guest-house in the morning, moved into the Quality Hotel. 4 o'clock in the afternoon, Maggi Lidchi comes to me and says, “I have a message for you from the Mother, ‘Don't worry about money, you can use all the facilities of the Ashram and Auroville, love and blessings, Mother’ ”... I had made no movement from my side towards her!
... Of course it was not possible to stay, because I was in India on a tourist visa, etc.... I didn't worry about stuff like that. There was no reality in Mother's world, except Mother. Everything else was just circumstances which she would move around.”[1]

(Savitra:) “Vincenzo, who had been living at Promesse, returned to Europe with plans to organise a caravan of workers who would be attracted by the possibility which Auroville represented and willing to participate in the building of an advance colony, Auromodèle. Through French radio and press interviews, a small group formed. At midnight of August 15th, 1969, the caravan of 15 left, all French except Steven, an Australian, and Krishna, a Moroccan. Even the few who had some insight into the spiritual-material tautology of Auroville, who had sensed its evolutionary implications, had no idea of the crucible that awaited them – in a more ancient tongue, the tapasya.
After six weeks of arduous journey, the assemblage arrived at what was to become Aspiration. It was October 2nd, 1969. Joined by some few others, they numbered 25.
... This was the first collective working – the first collective unit as opposed to the scattered individuals and families present in other areas of Auroville at the time. It was not only the primitive struggle with the terrain and the elements an opaque wasteland fired by an acid sun – but the deeper struggle within and with others. The exterior scene reflected the interior.”[2] 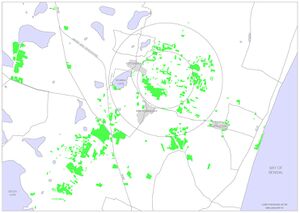 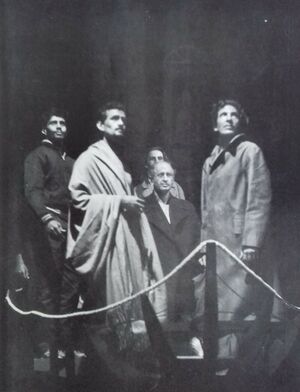 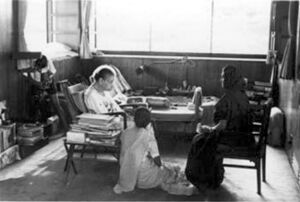