(Mother:) “If people don't know that I have come from above, they don't know the very first thing about me.”[1]

(Shyam Sundar:) “I think that always, at every moment, someone or other is calling You and You answer. Doesn't this disturb Your sleep or rest?

(Mother:) Day and night the calls come in hundreds – but the Consciousness is always alert and it answers.
One is limited only materially by time and space.”[2]

Collected Works of the Mother 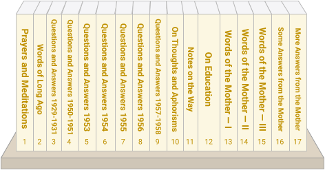 (Mother to Satprem, 1969:) “Have you brought anything special? ... Me, I have nothing, except a very small thing, which is that last night, for the first time, for about two hours continuously (I was simply as I always am, like that, quiet), the Force ... I seemed to be like a sponge. I don't know how to explain: it's not that it was coming ‘from above’, or like this (horizontal gesture), but it was coming in — I was like a pipe — and then going out ceaselessly, ceaselessly ... For one hour, the Force, with an intense golden color, went out like that, and then spread over the world. It's the first time I have felt it physically — I felt physically. And it had such extraordinary power! And this [the body], it was as if I were ... a water tap or a pipe, you understand, but it didn't come from a precise spot: it was as though I were immersed in it, and, through me, it flowed and flowed (gesture through Mother and spreading out everywhere). It went on for more than two hours early this morning, that is, between one and four (I don't know exactly); my impression is that it lasted for more than two and a half hours like that. And I saw the Force. The body only acted as a way to touch the earth — the Force came, then it went out and spread. And it went ... I saw that, I saw it go towards all those who call. It was directed by a wholly conscious consciousness, while I was ... quiet, (laughing) I just was the pipe!
It's the only thing I had to say.
It's the first time it has happened physically, it was physical.”[4]

(Mother to Satprem, 1971:) “The work being done is constant. And I see now that the body seems to be used as a ... (what?) a connecting point (gesture like a channel going through Mother), like that. But without its even knowing it. Because the action is very vast, you see — very vast and complex — and the consciousness is not aware of all the details: it only feels the Force working, that's all. And that's constant, day and night, nonstop.”[5]

(Amal Kiran:) “On September 17, 1934, after nearly seven years of attempt at Yoga I wrote to the Mother: “Pardon my writing to you without any specific reason; but I feel like telling you that you are extremely dear to me. In spite of my thousand and three imperfections, this one sense remains in me – that you are my Mother, that I am born from your heart. It is the only truth I seem to have realised in all these years. A very unfortunate thing, perhaps, that I have realised no other truth; but I deeply thank you that I have been enabled to feel this much at least.”
Sri Aurobindo replied something which all of us might remember. He said: “It is an excellent foundation for the other Truths that are to come – for they all result from it.” And the Mother wrote underneath: “My blessings are always with you.” ”[6]

(Amal Kiran:) “You know there are two Mothers who are ultimately one – the Mother inside us and the Mother outside. Of course, the aim in general of the Mother outside – the Mother who is in a body as our Guru – is to make us aware of herself within our being. But she is there also as a check on our imagination of what she is within us. The Divine Presence within, if properly found, is the most wonderful discovery; but, if improperly found, it is the most marvellous invention! Oh, it is ever so kind, so accommodating, so convenient – indeed it might as well be no other than ourselves in disguise. The ego in us is very clever and finds all sorts of ways to justify what it wants to do, and again and again the Mother outside us has to contradict the Mother inside before we are guided to the true Light within.”[7]