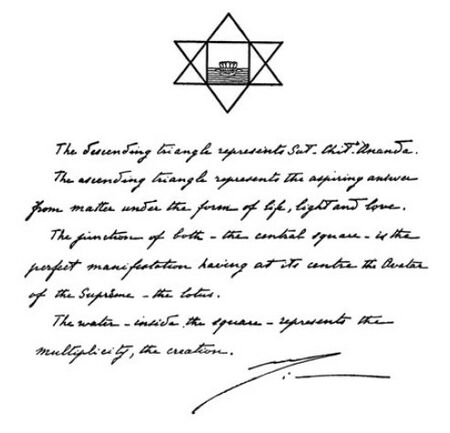 (Nolini Kanta Gupta:) “The first time I heard about the Mother was shortly after our arrival here. It was Sri Aurobindo himself who told us about a French lady from Paris who was a great initiate. She was desirous of establishing personal contact with Sri Aurobindo. That the Great Soul whom she meant was no other than Sri Aurobindo would be evidenced by a sign: she would be sending him something that he might recognise. That something was Sri Aurobindo’s own symbol — in the form of a diagram, known as Solomon’s Seal. Needless to add, after this proof of identity, steps were taken to facilitate her coming.”[2]