Samadhi of Sri Aurobindo and the Mother 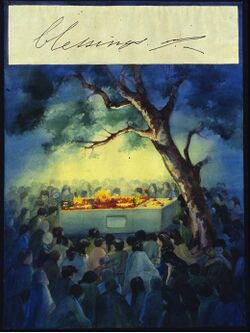 (Mother to Mona Sarkar:) “It is formidable. His presence vibrates, concrete, all around the Samadhi. And His influence penetrates and touches the central being and awakens the consciousness to the spiritual life. Even the agnostics, the unbelievers, people of bad-will who come out of curiosity to visit the Samadhi, return amazed by a mysterious alchemy and find an inner peace, because there He showers His peace and His compassion constantly. It is this that bathes them when they pass before Him. It is an unbelievable surcharged activity of His force and His presence.”[1]

(Mother to Mona Sarkar:) “When I look at the Samadhi and see what is happening there, I am astonished to find this column of dazzling light vibrating with an energy and a transforming force. It rises like this – (Mother makes an upward movement with the hands) with a splendour and a brilliance like an effusion of light from the length and breadth of the Samadhi. It is the New Light materialising.
At night, when everything is quiet, there are some entities who clean up this place of all that the people have left behind – all the formations of falsehood, desires, impatient supplications, all sorts of complaints, bad-will and maladies, as well as the hostile forces – and make this place peaceful and pleasant. They purify the whole surrounding with so much love so that His presence is felt.”[2]

(Mother to Mona Sarkar:) “It is He who is there – in the divine body – Himself divinised, the representative of the whole humanity, He who, by His own effort, by His tapasya and by the sadhana that He has done in His body, has made His body glorious. The realisations and the experiences He has had, what He has accumulated in His body by this yogic effort, has charged His body with a transforming power. It is charged – charged dynamically with a force and a light that overflows; it is this that envelops the whole atmosphere. All around, it is His presence. It endures because it is the Supramental force and shows no sign of diminishing. It cannot.”[3]

That's what I saw when I spoke to you the other day about what I called a ‘bath of the Lord’. The atmosphere was full, really chockfull of a Presence (you can't even call it a ‘vibration’, it's much more than a vibration: it's a Presence), but when people enter it, they don't feel anything! Or if they do, they don't even understand, it doesn't correspond to anything in their consciousness. But if I concentrate a particular vibration on their consciousness, I bring them into contact with it. And all of a sudden they feel something, with the impression that it's a new thing – it's nothing new! What's new is their capacity to perceive the thing.
In a general way, that's how it works: the Lord is everywhere, His vibration is everywhere, but what's new is the capacity to feel Him or be conscious of Him. From all eternity He has been there, for all eternity He shall be there.”[4]

(Mona Sarkar:) “Mother, you know that I have not done pranam at the tomb [the Samadhi]; but when I see the others doing it I think I am unfortunate and that I do not offer Him any homage.
But Mother, I have never felt that I should do pranam.

(Mother:) It is not a rule that one must do pranam. Only those who feel the need of doing it, should to it. It is much more important to be faithful to the spirit and to the teachings of Sri Aurobindo and to do nothing which is contrary to His teaching, rather than prostrating at a tomb.”[5]