SAIIER 2020:Development of vegetable gardens in Transition and Udavi schools


Development of school vegetable gardens in Transition and Udavi schools
by Priya V.

The aim of the project was to set up a vegetable garden in each school. This is to give students experiential learning by growing their own healthy (organic) food. And through that to understand at a deeper level how their choices about food affect the health of both themselves and the earth.

Priya with help of Rajan in the Buddha Garden team has been working with Transition and Udavi schools with the setting up and development of school vegetable gardens since 2016. This year the participants were 20 fourth-grade students at Transition and 70-80 students from all grades at Udavi.

Udavi School was the first school project in which Priya and Buddha Garden were involved. It has been going since 2016 when the very first four vegetable beds were created in the central part of the school garden. In 2017 an area of the school grounds was fenced and the original vegetable beds were moved there to create a separate vegetable garden. During the next year 2018-19 Ravikrishnabegan teaching four afternoon sessions each week to each of grade 7 – 11 students.  Which meant that each grade in the school had the opportunity for experiential learning in the vegetable garden. In the 12 beds a range of vegetables were grown including tomatoes, chilli, brinjal, beans, spinach, pumpkin and ladies fingers. Papaya trees were planted inside the garden area, bananas were planted to take the water from the nearby water tank, and a drip irrigation system was installed. Students used leaves from the rest of the Udavi School gardens and weeds and grass from the beds to create two piles of compost for use in the next year.

As the basic structure of the garden had been set up and was functioning well it was planned to make the garden more sustainable for the future. The students had already made great strides in this during the previous year by making their own compost using only materials from within the garden and the school. This meant that in the future they would not be reliant on external inputs to protect the fertility of their soil. It was thought that by creating a nursery the garden would become even more sustainable. They were already collecting their own seed and growing some seedlings, but would obviously do much better with a proper nursery that protected the seedlings from insects and animals. They would end up with plants that were adapted to their garden, (using your own seed means that the plants gradually adapt to local conditions) and would not be reliant on seed companies for seed. 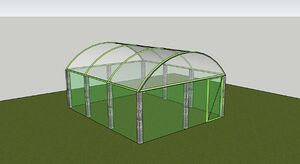 SAIIER provided us with enough money to continue developing the garden and for the erection of a nursery. During this last year Priya continued to visit the garden regularly and to teach the new class of students (grade 7) on Friday afternoons. Ravikrishna took the other grades on Monday, Wednesday and Saturday afternoons. It was expected that this would be the last year of Priya’s involvement as the garden would then be able to sustain itself in the future.

It soon became evident that there were going to be difficulties with building the nursery. The Auroville building application process had recently been changed and even buildings without foundations, like this nursery, had to go through what was turning out to be a long and involved process. Priya therefore had to spend a lot of time talking to the Udavi School site architect who was a great help in facilitating all the necessary submission of plans and other papers. Permission was obtained relatively quickly and we were ready to build in February.

With the help of various people in Udavi School, granite pillars were obtained and the fabrication of the metal structure was started. We were anticipating that we would be able to finish the building work around or very soon after the end of the financial year in March. Unfortunately this plan was thwarted by the lockdown imposed March 24th to try and stop the corona virus.  This meant that the building could not be finished or the accounts related to the building. The schools were shut down and it seems are unlikely to reopen until June or July.

In Transition School Priya works with Moorthy and Cauveri and their 20 fourth-grade students. During this year the students study ‘nature’ in its broadest sense with learning modules about the stars and planets, plants and birds. The initial aim of setting up a garden and growing food was to give the students practical experience of dealing with plants and natural processes and to integrate this with the classroom lessons. It was hoped that it would also provide them with the opportunity to find out and understand where their food comes from and the work it takes to put food on the table.

Over the last two years the garden has got well established with eight beds and regular compost making. It was hoped that in this, the third year of its existence, the garden could be made completely sustainable with the addition of a nursery. Although students do collect seed there is nowhere for it to be safely grown without being damaged by animals, birds and the weather. Up to now the garden has relied on seedlings from Buddha Garden. It was agreed that it would be much better in terms of learning about sustainability if students could grow their own seedlings.

Money was obtained from SAIIER for this and this was expected to be the major and final addition to the infrastructure of the garden this year.  Going forward the garden would be able to maintain itself for some years with minor repairs and without requiring new major infrastructure. The nursery would provide the school garden with all the resources to be completely sustainable – an infrastructure for growing plants consisting of beds and an irrigation system, a compost making process that recycles all the organic waste in the garden and a nursery to grow their own saved seed.

As happened in previous years this year the work in the garden took place over two ten-week semesters; the first from the end of September to mid-December and the second from early January to the end of April. The main session was first period on Wednesday mornings when Priya tried to attend the class. During this year Priya wanted to develop her book more and to make a series of posters to go with it. She therefore made a special effort to attend as many of these sessions as possible. Posters were created and worksheets handed out which the students worked on. This went very well. The students were very patient about the worksheets and seemed very happy to give feedback. Priya was pleased to also receive feedback from Cauveri and Moorthy. As a result of this work Priya has been able to completely revise the book which will hopefully be the basis of an online course for schools/anyone wanting to grow their own food. In addition Priya attended the practical sessions in the garden and where appropriate talked to the students about what they were doing.

As happened last year the beds were initially prepared and planted with chillies and ladies fingers.  The monsoon interrupted planting to some degree but beans, pumpkins and brinjal were later planted. By Christmas tomatoes, lettuces and rucola had also been planted.

During this time various efforts were made to try and start building the nursery, but it soon became apparent that for Transition this would be a very lengthy process indeed. The planning group were unwilling to allow any more buildings to be erected (even something like a very simple nursery) until various building issues related to the whole Transition campus had been sorted out. It was clear that this was unlikely to happen before the end of the financial year when the money for the nursery would have to be spent.

We therefore looked around for alternatives and came up with the idea for a small portable ‘home’ nursery that would not require building permission. In Buddha Garden we thought this might also be interesting for home gardeners in Auroville. We came up with a plan and we had a prototype made. This nursery has been designed to hold four trays (one for each group) and to be light enough for the students to move it around and lift it up fairly easily. We will finish it and deliver it to Transition as soon as we can in time for them to start growing seedlings for the start of next year’s garden project. We hope that there will be other people, maybe in Auroville and/or beyond who would be interested in a small nursery device like this.

Each school now has a functioning vegetable garden.  Unfortunately the corona virus lockdown stopped the building of a nursery in each place which would have made the gardens more sustainable.

One thing that the corona virus emergency has shown worldwide is the importance of local food security and the need to grow food in a way that is more in tune with nature. For the future it is more necessary than ever that the next generation understand where their food comes from and why growing food organically is so necessary. I see school vegetable gardens as being an essential tool in doing this. It is through these that students not only learn to grow organic food, but also have the chance to engage with the earth in a very practical way. Through this activity they can go on to learn about food security, food chains how much effort it takes to put food on the table and how the choices they make about food affect both their own health and the health of the earth.