PIFF Film Festival and Master Classes
a project of Aurofilm

This project was to organise 2 or 3 Master Classes in Auroville, inviting film directors, film technicians or personalities of the film production field. It was also envisaged to possibly club the Master Class along with the annual Film Festival we would organise. This year, it happened with the 2nd PIFF (Pondicherry International Film Festival).

We started in November 2019 with the visit of Stanzin Dorjai Gya, a reputed film director from Ladakh, whose wonderful documentary “Shepherdess of the Glaciers” we had selected two years before for our Indian Panorama. We had wanted to invite Stanzin for this screening but he was not available at that time. This year fortunately, he answered positively and happily came, bringing along several of his documentaries and the will to share moments with the Auroville audience as well as our young neighbours from the bio-region. Stanzin was eager to visit Auroville as well and know a bit more of our activities, mostly with regard to environment and education.  For our different programs here, Stanzin brought three films:

In addition to our program at MMC Auditorium with him, we could organize screenings and interaction at Udavi School, Future School and Last School where we shared the lunch with teachers and students as well. We also had a great shared moment with the dynamic and knowledgeable managers of WasteLess (specialised in awareness and education regarding wastes) and with Ok Lee, an Auroville Korean designer, founder of the very creative “Up-cycling Studio”, which specialises in creating art work from recycled ‘wastes’. 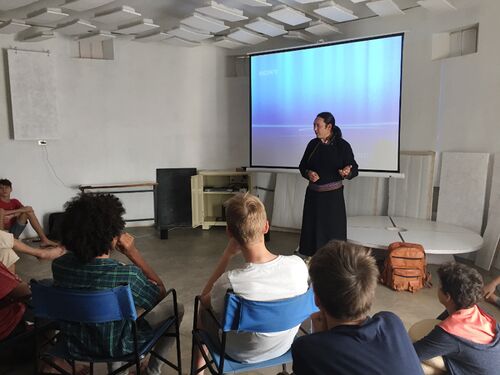 Our second event was in December 2019: Umesh Kulkarni from Pune, Maharashtra, an alumnus of the Film and Television Institute of India (FTII), Pune. He is known for Marathi films such as “Valu” (The Wild Bull), “Vihir” (The Well), “Deool” (The Temple) and “Highway”, his latest production. Umesh Kulkarni also directed notable short films such as “Girni”, “Three of Us”, “Vilay” and “Gaarud”. He is very appreciated as a film teacher as well.

Umesh came to animate an 8 day course organised by our partners of the Auroville Film Institute, Richa and Rrivu. We planned and organized a one evening master class along with film screening of one of his own films. Some of us could assist with the 8 day course taking place at Aurofilm studio (Kalabhoomi) and MMC, but along with the Friday screening at MMC Auditorium, a larger audience could assist with his presentation of his awarded and acclaimed film “Valu” (The Wild Bull). We got to know about his way of working with many actors/characters and crowds – from villages and remote places notably – and he replied to many interesting questions from the international audience gathered.

The third event we organized was the invitation of Vasanth Sai, a Tamil veteran film director who presented his latest film “Sivaranjani and Two Other Women”. Vasanth Sai did a very engaging presentation and after the film, he happily replied to the questions of our public. An intelligent and subtle ‘women-oriented’ film, it naturally attracted many a feminine presence. We had extended invitations to the various women’s groups of the Auroville region, to school students and others. Unfortunately our charismatic guest could not stay back for further interaction in Auroville or around, but stayed for a short photo session and exchanged warm greetings with the whole staff of our jam factory & restaurant, “Naturellement”. Like the screening, this interaction was very appreciated.

This year we once again relayed the 2nd edition of the PIFF (Pondicherry International Film Festival). It is a one week event organized by Pickurflick, a Delhi-based company promoting independent Indian and World Cinema through a platform on the Net and through this annual film festival. From our side, we are teaming up with the Cinema Paradiso team in order that more films can be screened in Auroville from our two units, from the large list of selected productions.

Our screenings were held from 23rd to 29th September 2019. The venue is quite convenient at MMC (MultiMedia Centre in Town Hall premises) and there was a good turn-out – it was better attended than last year's first edition of the festival. 19 films totally (short and long features) were presented, from which Aurofilm selected 5 over 3 days. We chose 2 world cinema fiction films (1 German and 1 Romanian), 2 Indian films, and 1 documentary film from Greenland. 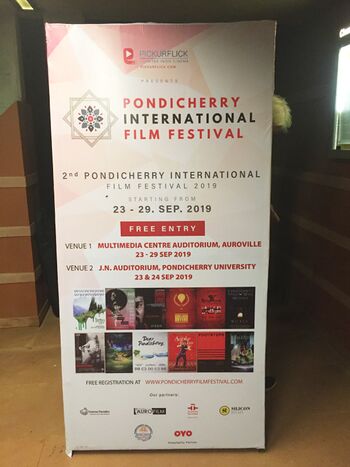 Aurofilm had two invitees (by the organising company): film director Vasanth Sai for “Sivaranjani and Two Other Women” (whom we invited again later for a master class) and Malayalam actor Prakash Bare for the Indian film “Painted Life”. From the Cinema Paradiso selection, film director Priya Krishnaswami was invited.

For this festival, we always collaborate in the logistics and other happenings (organisational meetings, visits and lunch/diners with the Delhi team and the chief guests, etc.) along with the Cinema Paradiso team.

We had planned to offer first “Cine-Master class”, a film appreciation program to be held at Aurofilm, Kalabhoomi. It would have included a film screening and discussion afterwards. To lead it, we had invited Jean-Luc B, a French Newcomer to Auroville, photographer by profession and a film lover. The Covid19 lockdown prevented this event from happening, but it can be re-scheduled for later.

It is always rewarding to witness how the people of various ages/generations, nationalities and cultures gathered in Auroville can be so enthused and eager to know about the life and culture of the people living in the different states and regions of India. What is shared on the occasions of these interactions (be it in a classroom or in a public auditorium, or anywhere we can gather and learn!) is amazing and will stay with the participants for long. We are particularly happy to have the younger generations exposed to them (with the visit of Stanzin Dorjai, to witness the joy of the Udavi school children and the interesting questions of the teenagers at Last School and Future School was a treat for us!) Similarly, the women (among them some coming from the nearby villages) we met after Vasanth Sai’s film were so grateful and proud to ultimately be ‘recognised’, talked about – the film addresses issues from three different backgrounds and periods in time.

Our aim is solely to give access to valuable and quality programs to people of different ages and backgrounds. This is education in a free and open-minded way, a way that gives every one the opportunity to access vaster levels of understanding of humanity, ultimately raising their/our consciousness… isn't this the aim of our Yoga in Auroville?