Panorama of Contemporary Indian Cinema
A project of Aurofilm

The aim of Aurofilm is to use Cinema as a tool for education and artistic and creative research. By organizing regular non commercial screenings of high quality films and related events we wish to offer to the Auroville community a way to develop taste, discernment and openness towards a change in consciousness. This year again we organized in Auroville a 3 day “Panorama of Contemporary Indian Cinema” (PCIC) aiming at sharing the best of today’s films produced in the different states of the country with the Auroville audience. 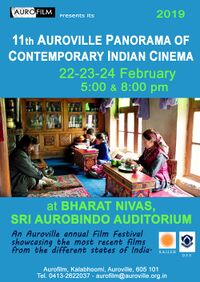 This year was the 11th issue of our festival, dedicated to the 2018 productions of Indian Cinema. We started to prepare for it in November 2017 when Susana and Surya from the Aurofilm team went to attend the 49th International Film Festival of India (IFFI) in Goa. This well organised and now renowned event is our main tool for this work (see separate report).

We contacted the Directorate of Film Festivals (DFF) in Delhi to request authorization to receive and screen 9 films for which DFF has rights, and we were lucky – and happy – to get confirmation for all the requested titles. We contacted another office in the Ministry for three films which had not yet received their Censor Board number and for which we had to request an exemption. We also wrote to one Marathi film director to request to screen his film. With the program set, we started working on a more definitive schedule, gather synopsis and pictures for the festival brochure and the announcements. Muthiah Kasi was our graphic designer for the festival brochure, and Susana designed individual posters for each film as well as our two main posters for the event.

As festival time came closer, the last preparations such as ordering snacks and flowers, printing and placing placards and posters in various key places in Auroville, checking the electrical arrangements and projection equipment at Bharat Nivas, and finally decorating the Auditorium were done timely.

The main theme and aim of this panorama is the discovery of the Cinema landscapes, people, voices and sounds from the different states of India through short and long most recent films. We had 5 short films: 2 from Maharashtra, “Aushad/The Medicine” (in Marathi) and “Monitor” (in Hindi), one from Odisha “Malai/Ice Cream”, 1 from Tamil Nadu (in English) with “The World's Most Famous Tiger” and 1 from West Bengal, “Sampurak”. Then 5 long features with “Sa/Simple Notes” and “Uronchondi” from West Bengal, “Baaram/Burden” from Tamil Nadu, “Sudani From Nigeria” from Kerala, and “Walking With the Wind” from Ladakh. 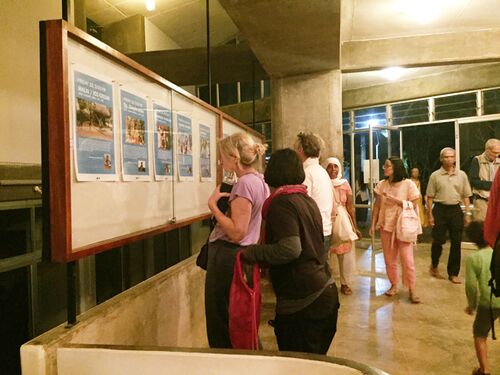 The large variety of issues these ten films brought with them and the original ways they were made and told, could without any doubt trigger interest and connection from everyone in the audience. On another note, with the exception of the Malayalam film “Sudani From Nigeria” which did well commercially in Kerala and the tiger documentary produced by National Geographic, all the others are not really seen in India and abroad. They are considered ‘non-commercial’, ‘regional’ or ‘art films’ and as such will unfortunately have a limited public exposure. In Auroville, with this annual Panorama, our international audience can discover some of these little gems.

Over the three days 22, 23 and 24 February, many people came to enjoy the Indian films. Aurovilians, Newcomers, students and interns, volunteers, young and older people, Westerners and others, Indians from different regions and states of India. Tea and snack between two films provided moments to exchange on Indian Cinema and to get informed about the next film and what would happen. We produced and printed 250 brochures. All screenings were introduced by Pavneet Kaur, an Auroville architect by profession, but mostly for us here a film lover and speaker for this art form. She had written short introduction speeches to prepare the audience to better appreciate each film and their context.

We felt that this year’s 3-day Panorama of Contemporary Indian Cinema was well received and had its own success thanks to the titles selected. Our public is also now more aware of our aims and reacts very positively – even though there are still a plethora of other cultural events overlapping at the time of the year in Auroville!

Next year we may not repeat our Panorama as it has been for the past decade. Some may remember that much before this PCIC in its current formula existed, we used to present annual film festivals and/or retrospectives, with invited personalities from the film world to talk about Cinema. We plan to restart such events, mostly in the form of “Open Classes” that will take place in our film studio, in Kalabhoomi, in the Cultural Zone of Auroville. 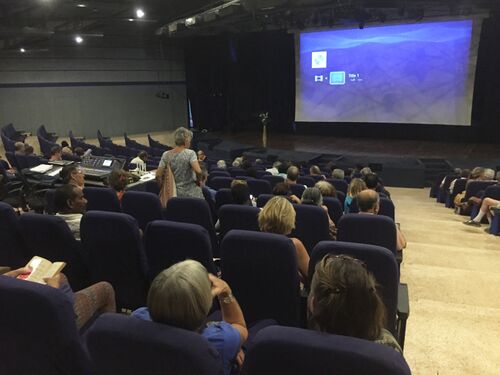