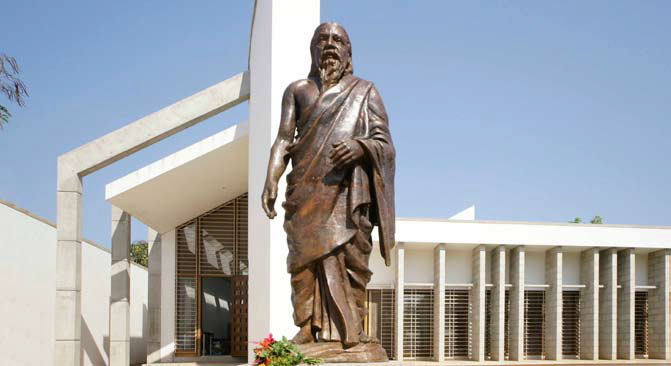 At 11pm on February 21st 2008, under the auspicious rays of ‘Guru Purnima’, the full moon dedicated to honouring our Teachers and Guides – which this year, unusually, coincided with the Mother’s Birthday – ten to fifteen people carried Sri Aurobindo’s statue, ignominiously lying on its back, head first, up the incline at Savitri Bhavan. It was then raised, with much shouting of instructions, waving of torches and deep intakes of breath, to a vertical position on a granite pedestal located in the centre of a circular lotus pond.

Sri Aurobindo was now standing there in full magnificence, his body powerful, beautifully draped, his hands and feet large, as if poised to walk to the horizon. His face was intense with a concentrated intelligence, his bronze patina contrasting with the white granite of Savitri Bhavan. He is poised there in front of the snow-white materialization of his epic poem Savitri for ever.

In the Indian tradition, a presence or a force radiates from a sacred object such as this statue of Sri Aurobindo. To his devotees he is not seen just as a historical figure identified with name and life-dates on a plaque. He is, in the mysteriously suggestive words of the Mother, “an eternal birth”[1]. The power of Sri Aurobindo’s presence most people find in his eyes, each eye radiating a very different light. Like the Mother’s eyes, the right one is piercing, all seeing, while the left is remote, looking deeply inwards. As a Tamil lady said when she gazed up at the statue, “Someone is in there.” Somebody else said: “It is as if he was always there.”

Predictably in Auroville, people’s attitudes towards the erection of the statue varied. One lady’s immediate response when she heard about it was; “Oh no!” – as she imagined the statues of politicians to be found all over India. Many Aurovilians felt unhappy that they had not been consulted about it at all. And then, would Sri Aurobindo have wanted a statue of himself? Did it have to be at Savitri Bhavan? The decision was taken when the Chairman of the Auroville Foundation, Dr. Karan Singh, was in Auroville in September 2007. He had informed the Working Committee beforehand that he would like to have a statue of Sri Aurobindo installed in Auroville, and asked them to suggest a suitable location. During his visit he was shown several possible alternatives. When he saw the lotus pond outside the main entrance of Savitri Bhavan he immediately felt that this was the most suitable place. Savitri Bhavan architect Helmut had already seen a version of the proposed statue, and admired it, so the Chairman’s proposal was welcomed. The next day Dr. Karan Singh stated publicly that he wished to dedicate the statue on February 29th 2008. Lalit Verma, the owner of Aurodam Art Gallery in Puducherry, would be preparing the statue in his workshop garden. Lalit is a child of the Ashram. He explains:

“To be allowed to create this statue is a huge privilege for me. I am Sri Aurobindo’s son and I want to express my love for my guru. The whole experience is part of a guru-disciple relationship. I had decided beforehand, that if I was not completely satisfied with the statue, I would destroy it.

“There are now four of these statues in India. One is in Sri Aurobindo Bhavan in Calcutta, which is the house he was born in, one in the Parliament House in New Delhi, the other in Surat, close to where Sri Aurobindo’s momentous intervention in the Indian National Congress took place in December 1907, and now in Auroville, a city dedicated to the work of Sri Aurobindo and the Mother.

“The main problem in creating the statue was that there are only a dozen photographs of Sri Aurobindo, all but one of them showing him in a sitting position. They were either taken in his youth or in his old age, with a gap of nearly 50 years in between. We blew them up to a huge size and lived surrounded by them for months as we worked. I got craftsmen from Calcutta, devotees of Sri Aurobindo, who lived on the premises in my garden workshop in Pondicherry for the most part of a year while working on it. They submitted 9 different models, which we rejected one by one, until I was satisfied. We felt fully convinced, when the only person who had seen and worked with Sri Aurobindo still alive, Nirodbaran, at that time above 100 years old, gave his approval.

“For the casting we used various metals (mainly copper alloyed with tin) in the traditional composition used for South Indian sculptures – though nowadays many different metals are used. Helmut added some of his parents’ gold jewellery to the mix as well as a few gold leaves from the Matrimandir guilding workshop, as it is said that gold gives a particular vibration.

“The process was laborious as we used the traditional, age old ‘cire perdu’ or ‘lost wax’ procedure, which today is essentially the same as it was in 2000 or 3000 BC. The principle is easily explained: a wax model of the sculpture is embedded in clay. Through firing in a kiln (more or less as it is being done for pottery) the clay gets baked and the wax melts and evaporates (‘lost wax’) thus leaving the negative hollow form of the sculpture within the burned clay, to be filled immediately with molten bronze. After a cooling time of a couple of hours the clay can be broken off the now hardened metal core, revealing the unfinished sculpture – solid bronze has replaced the former wax!

“In practical reality things of course are a bit more complicated, especially when huge sculptures above life size are to be cast: apart from subdividing it into parts, to be cast separately and joined later, special care has to be taken to assure even and thorough filling with liquid metal. In order to avoid air pockets, vents have to be attached carefully at the right places, as well as canals and conduits to facilitate distribution and easy flow of metal. All this shows, after the removal of the clay, as a treelike network of metal branches, which, when invisible in the hollow inside of the statue, add to its structural firmness, but are very disturbing when visible on the outside.

“After casting, a laborious process of finishing will start. Vents and conduits have to be removed with a hacksaw and the different parts will be assembled and joined by welding. Where necessary, the surface has to be ground and polished and finally treated chemically in order to initiate the process of forming a patina.

“A lot of course can happen during this rather complicated process. One of the moulds might get damaged – at worst to become obvious only after removing the clay, in which case we would have to start all over again ; or, as happened to us at one critical moment when we ran short of high energy coal, hardly available in Puducherry, urgently needed to keep the metal in our improvised foundry up at a casting temperature of 1200 degrees Celsius!

“The ancient Greeks and Renaissance sculptors such as Benvenuto Cellini, were able to cast lifesize statues in one go. They had perfected the technique of using just one mould from which the final statue would turn out with a perfect finish. This technique was also well established here in South India more than 1,000 years ago, and can be seen in the magnificent Chola Bronzes of Tamil Nadu.

“When the statue was completed in our garden-workshop in Kuruchikuppam (the actual casting was done in a backyard of the Ashram’s Coco Garden), a 30 foot palm tree in the adjoining garden crashed down during the night and landed a few feet away from the statue - it had literally fallen at Sri Aurobindo’s feet.”

Although the Savitri Bhavan statue is one of four in India made from the same master-mould, none of the others can compare with it, as it is the only free standing one. Sri Aurobindo stands proudly on a plinth in a lotus pond surrounded by the space and majestic proportions of Savitri Bhavan. We feel that he has come home to us.

Helmut, the architect of Savitri Bhavan, reflected on the statue as he sat on a bench under the trees gazing at the powerful figure in front of him. “As an urban designer I am happy to see that the statue provides a quality that architecture cannot. It gives an urban feel to this area, a sense of public space with a focal point, where people can meet, sit and meditate; a real step towards the future city.”

For the Aurovilians involved, the experience of participating in the process of the casting of the statue was fascinating and unique. Modern sculptors will normally just pass on their miniature clay or plaster of paris-models to experts in a highly specialised foundry, where – with the assistance of all kinds of high-tech equipment – all the necessary rest will be done. The casting will take place without further involvement of the artist, who normally is not welcome to stick around. The finished and perfected product will just be delivered to his doorstep or put in place with the adequate lifting tools. Whereas for us the contact with the fire, the smoke and smell, the feeling of power to be able to melt metal with simple means and to transform it through casting it into the refinement of artistic form and beauty, as well as the team spirit and concentrated interplay of a highly dedicated crew of craftsmen, were glimpses into Hephaistos’ workshop on Mount Olympos or into one of the foundries of Vedic times along the Saraswati river – an experience that will stick in our memories for the rest of our lives.