Ritam "On Public Spaces and the Development of Auroville's Crown"

On Public Spaces and the Development of Auroville’s Crown

Town planning, unlike building design, is a process that extends over a long time. While in ancient times it took centuries for a town to develop, we now do it in a few decades, but even so total control over the process is rarely possible. As the initiators and original planners get replaced, visions and opinions change. The following generation tends to look at things differently. Usage and experience might not confirm the planners' intentions (as many examples show, Chandigarh being one of them). Human nature will reject the idealistic planners' cry of, "We want to avoid anything bad", unless the basic principles of their planning are so true and self-evident that they cannot easily be undermined or set aside.

What enduring principles, what "anchoring course of logic" (Louis I. Kahn), can be established in Auroville, that are strong enough to gain the endorsement and loyal compliance of future generations?

Auroville clearly has such strong principles in its Master Plan. For example there is Matrimandir in the centre, surrounded by a ring of public-use buildings, which is called the Crown. But until now the full significance and function of the Crown has not been elaborated in detail, and this has led to confusion and dispute.

The street, determining a system of movement and a sequence of public spaces, may be considered the most vital institution in a city. Town planning starts with the street (and not with individual buildings, which are subordinate to it). In this sense, the street is the forerunner of all the institutions and buildings to come.

Being able to move about easily and confidently, to linger between buildings, to take pleasure in the spaces and buildings and life of the city, being able to mingle and move amongst other people – informally or in a more organized fashion – are possibilities that are fundamental to good cities and good building projects, today as in the past, in Auroville as elsewhere. The human quality of city streets and public spaces can play a major part in fostering these experiences.

In the course of history the street as a public space has undergone a number of changes. Although the Greeks and the Romans had city planners for their colonial cities, the planned city was hardly seen as a goal in the medieval period between 500 AD and 1500 AD. During that period the slow development of the city, which often took place over hundreds of years, allowed a healing process of continual adjustment and adaptation formed by use. The eventual outcome has often been urban spaces that provide extremely good conditions for outdoor city life by virtue of their spatial qualities and scale. Today these places have become powerful tourist attractions and desirable places to live.

A radical change took place during the Renaissance, with a transition from organically evolving cities to planned ones. Professional planners developed theories and ideas about how cities ought to look and to a great degree the city began to be considered as a piece of art to be conceived and executed as a whole. The areas between buildings and the human activities going on there were no longer the major points of interest, but were replaced by factors such as the symmetry of the plan, spatial effects, powerful vistas, impressive public buildings and the architects who shaped them. Urban spaces became larger, wider, straighter and, apart from some celebrated exceptions, rarely successful in human scale, since formal considerations and visual expression were given priority.

The awareness of the visual aspects of city planning developed during this period and the aesthetics formulated in this context formed the basis for the work of generations of architects in succeeding centuries, who concentrated more on buildings and groups of buildings as sculptural forms than on the human use of public spaces.

These aesthetic principles were supplemented in the early 20th century by the physical, physiological and functional ideas of a movement called Functionalism, which formulated criteria for healthy and physiologically suitable architecture based on the development of medical and hygienic knowledge. Buildings were oriented towards the sun rather than towards the street, green recreational areas were integrated into the city plan, work areas were separated from residential areas and public urban spaces were more or less eliminated.

Nowhere did the functionalists mention the psychological and social aspects of the design of buildings and public spaces. That these could influence social activities and contact patterns amongst people was not their concern. Functionalism was a distinctly physically and materially oriented planning ideology. Its most noticeable effect has been that streets and squares disappeared from town-plans and were replaced by "roads": spaces designed for the rapid movement of individual motorized traffic, often between endless grass lawns for "recreation". The automobile made its appearance as the pet of planners for decades to come.

The "drive-in city" maintained its appeal right into the seventies of the twentieth century, resulting in a very serious threat to the human quality of city life. The still-continuing invasion of the automobile and its byproducts, through the preference given by planners to the security, speed and ease of motorised transport has turned many lovely cityscapes into inhuman automobile-slums, congested with vehicles and polluted by poisonous fumes. Here the predominant feeling for the individual on foot is tension and danger, not at all a climate for social interaction - one cannot let down one's guard. Public spaces are degraded to traffic junctions, and congestion, accident rates and pollution are still escalating to more and more intolerable levels. Any non-motorised traffic participants such as pedestrians and cyclists are usually given second priority. The result is the loss of vivid street life and the disappearance of functioning public spaces in our cities - not to mention the negative effect on the health of human beings and the planet as a whole.

The life that takes place in and between buildings seems almost always to rank as more essential and more relevant than the spaces and buildings themselves. We know that human beings need contact. Apart from contacts at work, at school, at home in the family or other "arranged" groups, there is a need for the unpredictable, the spontaneous and unplanned. For example children often prefer to play on the street rather than in the well-equipped playgrounds prepared for them. We want these spontaneous contacts to happen in a relaxed way and not on the relatively formal level of school or workplace. Children see and learn how others work, behave and dress, and through this information and experience establish a confident relationship with the world around them. We are inspired by seeing others in action. Seeing other children or adults at play, children get the urge to join in and have ideas for new games. This often happens on the way to and from school. Street life, the safety of street space and its use by pedestrians play a major part in fostering this learning process. The luxury or need of taking children to school by car has unfortunately replaced that field of experience; it probably makes children eager to become car drivers as soon as possible.

Informal contact often takes place amongst pedestrians, but hardly happens between car drivers. A city designed to be experienced by pedestrians, offering beauty and variety in concordance with "eye and foot" (Louis I. Kahn), becomes penetrable and transparent, interesting and small in dimension, but rich in experience. It creates identity amongst its citizens, more loyalty to their city, and a fundamental feeling of human agreement and belonging.

“The whole idea of downgrading and minimizing the social part of the street in city life is the most mischievous and destructive idea in orthodox city planning; that it is so often done in the name of vaporous fantasies about city child care is as bitter as irony can get”, writes Jane Jacobs.

The cities of old were based on pedestrian movement, their size adjusted to a maximum extent of 3 to 6 km. Auroville's diameter is 2.5 km (the city circle within the Outer Ring Road). This means that it can be crossed by foot within 35 minutes (70m per minute walking speed).

Why not declare the whole city area within the Outer Ring Road an area of pedestrian priority, with limited access for individual motorized transport? Car and motorbike drivers could reach their destinations via the Outer Ring Road where they can move freely and from which they can access the different zones of Auroville. But they would have to return to the Ring Road to reach other targets, since they should be allowed to enter the Crown only for emergencies. One should not be able to drive around or across inside the City Circle. As we can see on Connaught Circus in New Delhi "Inner Rings" attract traffic with magnetic force, because the shortest trip to cross the city will pass through them. This is definitely not desirable for Auroville's Crown.

Instead we should be aiming for a centrifugal effect as far as motorized traffic is concerned, stepping down its disturbance from the periphery to the centre - an area which contains the "Soul of Auroville", the Matrimandir, and was named "Peace" by the Mother.

New Vision of the Crown

This would open up the wonderful option for the Crown to develop into a sequence of urban spaces where pedestrians and cyclists are given priority. Slow speed and preferably non-polluting Public Transport vehicles, slowly but frequently circling the Crown, and stopping at points within comfortable walking distance, will not pose any danger. Other necessary traffic would only be permitted at dead slow speeds, and probably only at certain times of day. Although used by all, the area would be unmistakably designed for the ease of pedestrians. Child play, trees for shade with benches, street side cafes and the absence of separate traffic lanes or pavements will foster a vivid street life. Safety from motorized traffic as well as from ill-intentioned strangers will be ensured through the priority given to human presence; there are more "eyes on the street" and less "get-away-vehicles". Buildings will no longer have to turn away from an unbearably dangerous and polluting street environment but will come close and open up on both sides of the street. Closeness, human scale and the old friendship between street and buildings will be recreated.

In this case there would be no need to create a separate Pedestrian Boulevard. In fact such a separation between a Crown Road and a pedestrian walkway would inevitably signal that racing is allowed on a road that is obviously and especially being reserved for faster movement. The result would be inherently dangerous for the majority of the population, especially for the children, who would have to cross the Crown twice a day to reach school from their residences on the other side.

This concept is neither a utopian fantasy nor the pure heresy it might appear to car and motorbike lovers. It only follows the principles of "Traffic Calming", that are currently being implemented in many pedestrian areas and even entire city centres throughout the world.

The ideologies on which most cities and housing areas have been planned right up to the 1980s gave priority to automobile-based mobility. But private motorized traffic has turned out to be the key obstacle in developing a sustainable and livable city. As long as cars and motorbikes dominate, cities lose the benefit of streets as public space which are a vital part of its social landscape. "Car-free" is rapidly becoming part of the vocabulary of forward-looking city-planners.

In the planning of Auroville it ought to be our major aim to reduce vehicle counts on the Crown, which should be designed primarily for pedestrians, cyclists and Public Transport. This will help to maintain a high quality of life in our city-centre and peace around Matrimandir. 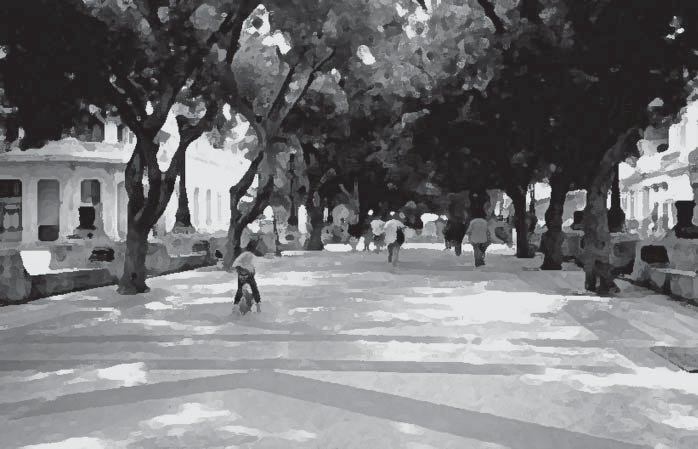