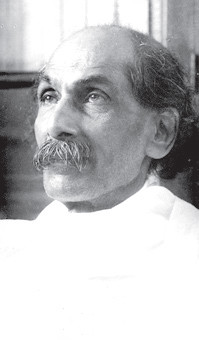 (Autobiographical Notes, Note on the Texts:) “A young member of Barindra Kumar Ghose’s revolutionary secret society, Nolini Kanta Gupta (1889 – 1984) was arrested and tried for conspiracy in the Alipore Bomb Case. Acquitted, he worked with Sri Aurobindo on the Bengali weekly “Dharma” in 1909 and 1910. In October or November 1910, he joined Sri Aurobindo in Pondicherry. After remaining there for most of the next nine years, he returned to Bengal, where he got married in December 1919.”[1]

(Shyam Sunder:) “Once Mother received a number of Rolex wrist watches. One she gave to Amrita, another to Nirod. “Nolini does not need a watch,” she said, and gave him a dictionary.
Nolini-da was so punctual in his routine that it is said that people checked the correctness of their watches with his arrival at certain places.”[2]

(Draft of a letter from Sri Aurobindo to Nolini, c1919:)
“Dear Nalini,
Quorsum haec incerta? Do you really mean to perpetrate the sexual union dignified by the name of marriage, or don’t you? Will you, won’t you, will you, won’t you — to quote the language of the spider to the fly? Whither does all this tend, to fructuation (I was going to use another word) or fluctuation, — footballing and floating and flirting as much as exchange of eyes in the delicious brevity of kanya dekha and the subsequent vast freedom of imagination will give you of that modern amusement. But all this seems too Robindranathian, too ki jani ki, to come to a practical conclusion. To weigh in the subtle scales of amorous thought noses and chins and lips and eyes and the subtleties of expression is no doubt a charming mathematics, but it soars too much into the region of the infinite, there is no reason why it should work out into any sum of action. Saurin’s more concrete and less poetic and philosophic mind seems to have realised this at an early stage and he wrote asking me whether it was worth while to marry with our ideas and aims under present social conditions. After about two months’ absence of cogitation, I have returned a sort of non committal answer, — that I don’t think it is — very, but it may turn out to be and on the whole he had better consult his antarâtman and act or not act accordingly.”[3]

(Nolini:) “[In the earliest days] the Mother had been to us a friend and companion, a comrade almost, at the most an object of reverence and respect. I was now about to start on my annual trip to Bengal – in those days I used to go there once every year, and that was perhaps my last trip [1921]. Before leaving, I felt a desire to see the Mother. The Mother had not yet come out of her seclusion and Sri Aurobindo had not yet retired behind the scenes. I said to him, “I would like to see Her before I go” – ‘Her’ with a capital H, in place of ‘the Mother’, for we had not yet started using that name. Sri Aurobindo informed the Mother. … The Mother came in from her room and stood near the door. I approached her and said, “I am going,” and lay prostrate at her feet. That was my first Pranam to the Mother.”[4]

(Mother:) “I see someone like N., who obviously is an exceptional subject in the sense that he vibrates with the intellectual vibration (Sri Aurobindo used to say, and it is obvious, that of all those around him, he was the one who understood best), well, even for him ... it goes off at a tangent. It's not that he understands nothing, but it's at a tangent. It's a mitigated understanding, very slightly distorted, and which relates everything to the sense of the person, of the [Mother's] individual, so the thing loses all the ESSENCE of its value.... What I would like to be able to communicate is precisely that absence of individual.”[5]