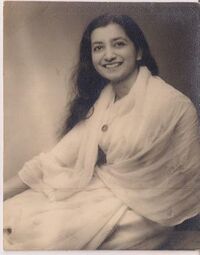 (Mother to Huta:) “My child, when I was writing this card for you, I came to know that it is for ages that I have been loving you.”[1]

(Mother to Huta:) “I know the beginning of the world and its end, up to Eternity. Your failure is that of your past birth and not of your present birth. The failure is nothing but a step forward to your success. You will have to dig each step carefully and concretely to set your feet firmly and proceed further to the Eternal. But you must be obstinate.
The Highest cannot be realised until one becomes perfect – it takes year after year, century after century – however, you must be obstinate like the Supreme. Be more and more obstinate in front of your own defects.
This life is not so simple and straight – it is like the waves of the ocean.
Do not care about what people say because they are ignorant – their judgment leads you nowhere.
Remain in the vastness of Supreme Love, Light and Peace....
This is the law of the Supreme.”[2]

(Huta:) “On Tuesday 9th November [1954] I was fortunate enough to be granted an interview with the Mother, in her Interview Room at the Playground. This cosy room, softly lamp-lit, was surcharged with a marvellous peace. Flowers, especially jasmines, spread their fragrance. The ethereal atmosphere carried me away. Everything was hushed except for the fast beating of my heart as I drew near the Mother.
She sat in a chair. Her feet, in white Japanese tabis, rested on a footstool. … The aura of her proximity, and her delicate French perfume entranced me. Tears welled up in my eyes. A prayer arose from the depths of my heart: “Mother, liberate me...” She was moved by the cry of my soul. Her expression changed, her eyes became yet more brilliant and powerful. Slowly she lifted her hand and pressed it on my head. Suddenly I felt as if the whole world was revolving around me at high speed. Her Force suffused my body. I was oblivious of my existence for a second or two and merged into her divinity. I closed my eyes in sheer ecstasy. This experience was unique in my life.”[3]

(Huta:) “On the evening of Saturday February 12th [1955] the Mother called me to her beautifully decorated Interview Room. She asked me, “Child, are you a minor?” “No, Mother, I am not,” I answered. [Huta was 23 years old.] She went into a deep contemplation for quite a while. I was enjoying her nearness, and wondering what she would say. I gazed at her face, which was so divine, so serene, so lovable. She caught me watching her when she opened her eyes abruptly.
Then she told me that I should write to my family and my in-laws, explaining my departure for good. In the course of our conversation I asked the Mother, “What are the important points of this Integral Yoga? What should I do?” She smiled and replied, “Have faith in the Divine, love the Divine, and develop the consciousness.” She saw the confusion in my mind, and patting my hands assured me that she would see me through. Tears of gratitude sprang to my eyes.
I pulled the eight gold bangles from my wrists and gave them to her – they were the last of my possessions. I had brought with me absolutely nothing that had belonged to my husband, or been presented to me by him or his family.”[4]

(Shraddhavan:) It was from 1956 onwards that the Mother, herself a gifted artist, started training Huta in oil-painting. It seems she had a special purpose in this, for she stated that she had earlier tried with several other people before Huta was born. She wished to find someone with the right kind of receptivity to be able to give expression through painting to her own vision. Although Huta had no any earlier experience with art, she responded to the Mother’s teaching and several of her visionary paintings were selected by the Mother to be printed for distribution as New Year cards.
In October 1961 the Mother initiated the work of illustrating Savitri using Huta’s hands. She gave the name “Meditations on Savitri” to this project, and has herself has described how they worked:

Savitri, this prophetic vision of the world’s history, including the announcement of the earth’s future.  –  Who can ever dare to put it in pictures ?
Yet, the Mother and Huta have tried it, this way.
We simply meditate together on the lines chosen, and when the image becomes clear, I describe it with the help of a few strokes, then Huta goes to her studio and brushes the painting.
It is in a meditative mood that these ‘meditations’ must be looked at to find the feeling they contain behind their appearance.

(Shyam Sunder on a meeting with Mother, 4 November 1972:) “Mother said that Huta will be the guardian of Matrimandir. For her a residence is to be built in one of the twelve gardens there. She has given money also for it.
I said that when Roger comes back I will speak to him about it and get it settled.”[6]

(Shraddhavan:) “When we were together Huta would often tell me about her experiences with the Mother, particularly during the time when the Savitri paintings were being made; and at other times she would share with me various things that were on her mind, troubling her. Those meetings were not always easy for me. This small sweet-looking lady, who could be so loving and generous and appreciative, also had somewhere within her a lion who would wake up and roar fiercely at anything she felt was contrary to the Mother’s wish and will. She worked tremendously hard, made enormous efforts to fulfil the mission she felt the Mother had given her, and she expected everyone else to come up to her own high standards. Any slackness or carelessness would annoy her, and if she felt any intention to distort the Mother’s intentions she could become frighteningly fierce.”[7]