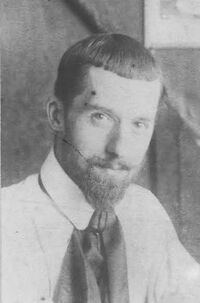 (Sujata:) “Life brought its thousand and one riches to the growing child.
The child was now a girl.
The girl was now a woman.
Mirra was now in her late teens.
Matteo had entered the Polytechnique.
The nineteenth century was drawing to its close.
Mirra was finding the life she was leading more and more limitative and distateful. In all likelihood sparks flew often and often between Mathilde and Mirra.
“Born in a perfectly respectable bourgeois family, where art was considered as a pastime rather than a career, and artists as frivolous, easily inclined to debauchery and with a dangerous disregard for money, I felt — perhaps out of a spirit of contradiction — a compelling need to become a painter.” Thus begins the speech of the Artist, written by Mother in 1954, in the play The Great Secret.
As soon as she attained the required age, Mirra joined the [Académie Julian] in Paris. There she came into closer contact with Henri Morisset, son of Edouard Morisset whom Mira Ismalun had long known. The two families had continued to be on friendly terms.
On October 13, 1897, Mirra Alfassa and Henri Morisset were married. Mirra was nineteen, going on twenty.
This was as good a way as any to change her surroundings. At any rate, a good way to plunge into a new way of life.” [1]

(Mother to Satprem, 1961:) “I remember a good-hearted priest in Pau [Southern France] who was an artist and wanted to have his church decorated – a tiny cathedral. He consulted a local anarchist (a great artist) about it. The anarchist was acquainted with André’s father and me. He told the priest, ‘I recommend these people to do the paintings – they are true artists.’ He was doing the mural decoration – some eight panels in all, I believe. So I set to work on one of the panels. (The church was dedicated to San Juan de Compostello, a hero of Spanish history; he had appeared in a battle between the Christians and the Moors and his apparition vanquished the Moors. And he was magnificent! He appeared in golden light on a white horse, almost like Kalki.) All the slaughtered and struggling Moors were depicted at the bottom of the painting, and it was I who painted them; it was too hard for me to climb high up on a ladder to paint, so I did the things at the bottom! But anyway, it all went quite well. Then, naturally, the priest received us and invited us to dinner with the anarchist. And he was so nice – really a kind-hearted man! I was already a vegetarian and didn’t drink, so he scolded me very gently, saying, ‘But it’s Our Lord who gives us all this, so why shouldn’t you take it?’... I found him charming. And when he looked at the paintings, he tapped Morisset on the shoulder (Morisset was an unbeliever), and said, with the accent of Southern France, ‘Say what you like, but you know Our Lord; otherwise you could never have painted like that!’ ”[2] 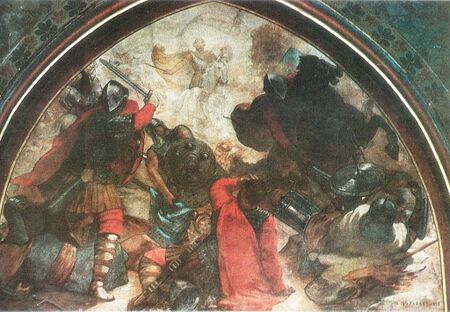 (Mother to Satprem, 1960:) “Once, I remember ... I was there in Tlemcen with André’s father, who had come to join us – a painter, an artist. Théon was wearing a dark purple robe. Théon said to him, ‘This robe is purple.’ ‘No, it’s not purple,’ the other answered, ‘it’s violet.’ Théon went rigid: ‘When I say purple, it’s purple!’ And they started arguing over this foolishness. Suddenly there flashed from my head, ‘No, this is too ridiculous!’ – I didn’t say a word, but it went out from my head (I even saw the flash), and then Madame Théon got up and came over to me, stood behind me (neither of us uttered a word – the other two were staring at each other like two angry cocks), then she laid my head against her breast – absolutely the feeling of sinking into eiderdown!
And never in my life, never, had I felt such peace – it was absolutely luminous and soft ... a peace, such a soft, tender, luminous peace. After a moment, she bent down and whispered in my ear, ‘One must never question one’s master!’ It wasn’t I who was questioning!”[3]