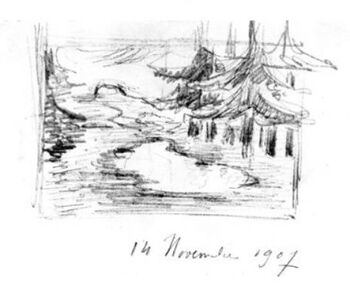 “The pine tree story is also from Tlemcen.
Someone had wanted to plant pine trees Scotch firs, I think — and by mistake Norway spruce were sent instead. And it began to snow! It had never snowed there before, as you can imagine — it was only a few kilometers from the Sahara and boiling hot: 113° in the shade and 130° in the sun in summer. Well, one night Madame Théon, asleep in her bed, was awakened by a little gnome-like being — a Norwegian gnome with a pointed cap and pointed slippers turned up at the toes! From head to foot he was covered with snow, and it began melting onto the floor of her room, so she glared at him and said:

“What are You doing here? You're dripping wet! You're making a mess of my floor!”
“I'm here to tell you that we were called to this mountain and so we have come.”
“Who are you?”
“The Lord of the Snow.”
“Very well,” replied Madame Théon, “I shall see about that when I get up. Now go away, you're spoiling my room!”

So the little gnome left.
But when she awoke, there was a puddle of water on the floor, so it couldn't have been a dream. And when she looked out the window, all the hills were snow-covered!
It was the first time. They had lived there for years but had never seen snow. And every winter after that, the hillsides would be covered with snow.

You see, when people are in this occult consciousness, everything is possible — it creates an atmosphere where ALL, all is possible. What to our European common sense seems impossible ... is all possible.
She was English and he.... I don't know whether he was Polish or Russian (he was of Jewish origin and had to leave his country for that reason). But they were both European.
It was a very interesting world. Really, what I saw there.... Well, once you left, you would ask yourself, “Was I dreaming?!” It all seemed so fantastic!
But when I recounted these experiences to Sri Aurobindo, he told me it was quite natural: when you have the power, you live in and create around yourself an atmosphere where these things are possible.
Because it is all here, it just hasn't been brought to the surface.”[1]