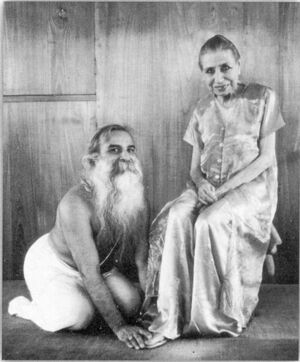 (Loretta:) “Champaklal looked after Mother in her room, and he kept everything of Mother's very carefully – everything, down to the ashes from the incense that she burned.”[1]

(Amal Kiran:) “He had come fairly early and he was one of the few, if not actually the only one, who from the beginning addressed the Mother as ‘Mother’. Many were a little bit averse to accepting her; the chief argument was that she was not Indian – how could there be a Divine Representation in a non-Indian? (laughter) All the Avatars had been Indians, so the Mother could not be an Avatar, she being French! But Champaklal had no such inhibition.”[2]

(Nirodbaran to students, 1970:) “My bearded lion-friend, Champaklal, told me, and others corroborate, that it was he who first addressed the Mother as ‘Mother’, and Sri Aurobindo as ‘Father’. He came here first in 1921, I think, and he was a lad of 17 or 18. Sri Aurobindo lived at that time in the Guest House. Champaklal came with a few friends or to put it the other way, a few friends brought him. At that time the Mother was behind the veil, if you like, and wasn't seeing anybody. Sri Aurobindo was seeing people. So, when Champaklal approached Sri Aurobindo, he simply fell prostrate at his feet – he stretched his hands and caught hold of his feet. And, please remember, he lay in that position for about an hour, Sri Aurobindo sitting like that, he lying stretched for an hour! Then, he said, he knew nothing about time and space, but he felt some sensation which he took to be a spiritual experience or something of that sort. When he got up he saw that his body had been covered all over with ants, biting him (Laughter). Isn't it remarkable?”[3]

(Champaklal:) “While giving Sri Aurobindo’s lunch dish to me after he had finished, Mother said: “The Being we want to manifest in you demands your complete surrender. He is one of four brothers. He wants to manifest in you and is waiting for you to be ready. And that Being wishes that I should work in you.”

On another day she said: “The Being has entered into you.”

The next day, she said: To bring down Immortality four pillars are needed. Of them

Purity is Kanai,
Faith is Tirupati,
Adoration is Rajangam,
Aspiration is Champaklal.”[4]

(Champaklal, January 1933:) “I have done this picture without anybody's help. How is it? Will I be able to learn?

(Mother:) To learn means months and months of study before any picture can be done; studies from nature, drawing first for a long time, painting only after.
If you are ready to study hard and regularly, then you can begin, otherwise it is better not to try.”[5]

(Mother to Champaklal, February 1935:) “Champaklal,
Les cartes sont très jolies. [The cards are very pretty.]
I am sending one back. I would like you to draw a rose in the corner.
With love and blessings always.”[6]

(Mother to Champaklal, April 1935:) “To Champaklal with our blessings.
The flowers are very pretty. Surely I hope you will do some more.”[7]

(Champaklal, October 1935:) “Mother, this picture I have done without any help.

(Mother:) It is a good attempt (the sky is rather heavy).
Love and blessings to my dear child.”[8]

(Champaklal, April 1940:) “For the past few months I get the idea of going from here. Is it from you? If it is Mother's wish I can go.
Your ignorant child, Champak, with Pranam.

(Mother:) No, it is a hostile suggestion trying to send you away because your presence is most helpful and necessary.
I hope you will dismiss this wrong suggestion altogether and think no more of it. Your place is near us and you must stay here.
With our love and blessings.”[9]

(Mother writing in Champaklal's birthday book, 2 February 1951:) “To my most faithful child, the keeper of the true remembrance, I give today the assurance of my full confidence. I did not write in this book in 1950 because it was to be the most important year of your life, the year that has put a seal to what you were and opened in front of you the door leading to what you will be: a true and complete child of our Lord whose presence here is more total than it has ever been.
With my love and blessings.”[10]

(Mother writing in Champaklal's birthday book, 2 February 1963:) “Bonne Fête!
Champaklal, my dear child
The way is wide open and it is an artistic one, a fine way of expressing your soul, which will become more and more clear and powerful with the inner growth and flowering of your heart as a sincere expression of your eternal Soul.
With love and blessings.”[11]

(Mother writing in Champaklal's birthday book, 2 February 1965:) “Champaklal,
This year, I feel clearly that you have become a part of myself.
For ever love”[12]

(Mother writing in Champaklal's birthday book, 2 February 1972:) “Bonne Fête
To Sri Aurobindo's and Mother's Champak
One of the hundred[13]
With my love, appreciation, trust and blessings for ever.
En route vers la Réalisation”[14]

(Shyam Sunder:) “In my early days, when I received from Mother a big birthday card, clad in silk, Navajata complimented Champaklal for it. “I only made the card,” Champaklal protested, “It is Mother who chose it.” ”[15]