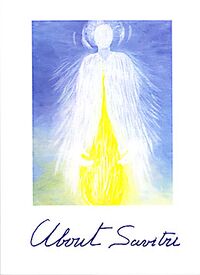 (Shraddhavan:) “In December 1967, Huta took to the Mother a file containing all the passages of the Meditations on Savitri, and asked her, “Mother, will you please explain them to me and allow me to take down your explanations on the recorder? Then surely people will understand the Savitri paintings more easily.” In reply the Mother said enthusiastically:

“If I have to explain these passages, I would prefer to start from the very beginning and give a full explanation of the whole of Savitri.”

Already in 1954, Amal Kiran reports, the Mother had told a small group of sadhaks:

“Savitri is occult knowledge and spiritual experience. Some part of it can be understood mentally, but much of it needs the same knowledge and experience for understanding it. Nobody except myself can explain Savitri. One day I hope to explain it in its true sense.”

From January 1968 up to August 1970 the Mother met Huta regularly for this work, to which she gave the name About Savitri. The first volume of the Mother’s explanations, covering Book One Canto One accompanied by paintings of Huta, was published in 1972. For this volume the Mother gave her message:

About Savitri was published in four parts, corresponding to Canto One (1972), Canto Two (2002), Canto Three (2005) and the first half of Canto Four (2006) of Book One of Sri Aurobindo’s Savitri. While the earlier series Meditations on Savitri consists of paintings inspired directly by the poem, in this later series the paintings made by Huta under the Mother’s guidance are inspired by the Mother’s comments on Sri Aurobindo’s mantric lines. Unfortunately the work was discontinued from August 1970 by the Mother.”[1]