Difference between revisions of "Visions of Champaklal:The Mother and the 'Aspiration' Flowers"

The Mother and the 'Aspiration' Flowers

(In the Meditation Hall of Sri Aurobindo Ashram, Delhi Branch)

Today is the birthday of Tara Jauhar, one of the Mother's favourite children. Now she resides at the Delhi Ashram branch and does the Mother's work there. No human being can understand the Mother's way of working. She arranges many things by creating certain circumstances which look so natural and She works out what She wants to do. The Mother has showered Her Grace and Love upon us and She still continues to do so much more than ever before. At 7 p.m., the mediation started.

I noticed that the hall was ten times bigger than at present. It was packed with people. The children were in a greater number. Some ladies had come even with their new-born babies. Peace was pouring like heavy rainfall. The hall was charged with peace – nothing was felt except peace. Then blue light came down and filled the hall. After some time, bright golden light descended on all and penetrated everywhere. Now I could see the persons sitting there.

The Mother was seen right in the middle of the hall in Her luminous transparent Golden Body. I saw radiant golden Aspiration flowers around Her but they were much bigger in size than we usually see here. 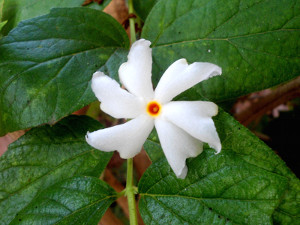 They began to increase in number and turned into a huge mountain in full bloom. The Mother was standing on the top of this mountain. It was a magnificent sight. The Mother gave her blessings to everyone.

The flowers began to move around, and covered the persons, some just a little, some more. Very few persons were fully covered and amongst them the number of the children was larger.

The Mother looked at each and every one with Her charming and compassionate smile. Now I saw a stir in the Aspiration flowers. They started flitting like arrows, into different parts of the bodies of the persons there. In some persons they entered into one or two parts, in some into more parts, while in a few into all the parts of their bodies.

In several persons the flowers went straight inside. In some others they could not get in at all and were thrown back. One after another, they tried all the parts of the bodies but were not allowed in! This process continued for some time but not a single flower could enter the bodies. The bodies rejected them as if they resisted the entry of the flowers into them. It was a very amusing sight indeed. Now the few persons into whom the flowers went right inside, into all the parts of their bodies, could not be seen at all. They became invisible! I do not know what happened to them. It was like magic! There was a movement amongst the people but I could not see or understand what it was.