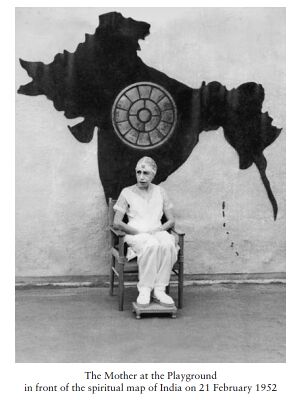 “I hope the trouble in Kashmir is the first step towards the unity of India and Pakistan.

“It is for the sake and triumph of Truth that India is fighting and must fight until India and Pakistan have once more become One because that is the truth of their being.” (16 September 1965)[3]

“The language problem harasses India a good deal. What would be our correct attitude in this matter?

Unity must be a living fact and not the imposition of an arbitrary rule. When India will be one, she will have spontaneously a language understood by all.” (5 August 1965)[4]

“The country feels much concerned about national unity. What is the Mother’s vision of things? How will India do her duty by herself and by the world?”

The unity of all the nations is the compelling future of the world. But for the unity of all nations to be possible, each nation must first realise its own unity.” (5 August 1965)[5]